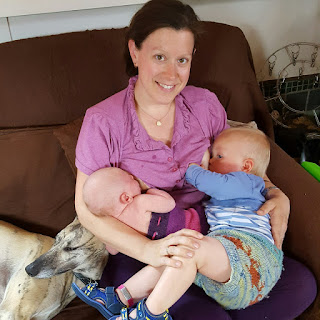 There's been the occasional comment about their "close gap". I don't know.... we never planned any of it and I never had a fixed idea in my mind so this gap to me is the perfect gap. It's what we've got and once I got my head around it, we got it to work! Helpfully, big girl has never been hostile to the little boy. She was very angry at me for the first few weeks but from the start she liked her little brother. She'd stroke his head and on occasion I've had to intervene when she tried to share her food with him - once I found half a grape in his mouth!

While it's been lovely and they are both giving me lots of joy, I have never worked so hard in my life on a 24/7 basis. Worked mentally, emotionally, and physically. The demands are constant and immediate. Sit down with a cup of tea? Don't make me laugh - I count myself lucky if I get to brush my teeth in the morning and showers have become a twice-a-week occasion (how's that for openness??)

We're getting to a point, baby being 7 months old, where they're actually interacting with each other occasionally and it's so cute to see them laughing together! I cannot wait to see their relationship blossom as they grow older. 19 months is a great gap to have.
at 17:53 No comments:

I haven't written in months, and for good reason. Life has taken on a whole new level of hectic since the boy joined us in May; he's now 7 months old and starting solids and sitting unaided! So quick, I must have blinked.... 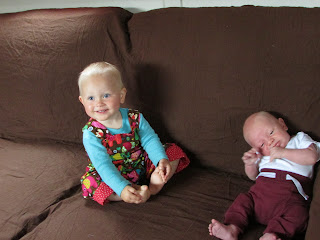 A conversation with a friend today made me realise that I'm already half forgetting the early days - maybe mentally blocking them out? - and I don't want to forget. Those were hard times, but I don't want to bury them because we got through and we've all grown so much because of them.

Like last time, Mr had two weeks off after I gave birth. Unlike last time, his role was mainly to occupy and be there for the toddler, who had just started walking. Luckily I was physically much better after this birth (going for a family walk the very next day) so I didn't need rest as much... and the first days as a family of four were anything but restful! Mr did what he could but of course toddler girl still wanted mummy and the newborn was windy and cried quite a lot.

At the end of his 2 week paternity leave, Mr sat down opposite me, looked wearily at me and asked, "are you angry at me for some reason?" - ouch.

I had been short with him, easily annoyed, expecting him to read my mind and getting angry when he couldn't - all the while I knew he was doing his very best yet I couldn't help it. I was stressed and worn out and I took it out on him. My rock and anchor was where I dumped all the rubbish feelings and he really didn't deserve that!

I'd love to say it all got better after this. In fairness, I didn't take out my stress on Mr quite as much but that's at least partly because he went back to work and simply wasn't around! I had to sink or swim with my 2 under 2. And for the first month or so, I barely kept us above the water. Constantly torn between toddler and baby, neither getting my full attention much of the time - but, eventually, a routine came about and I learned a thing or two about what was feasible in a day and what wasn't. I'll probably do a separate post about what our days look like now.

Having two kids who are actually really easygoing and lovely, having parents in law close by who are willing and able to help, and a solid support network of local mum friends: those are the things that made all the difference in the early days.
at 22:31 No comments: