If there was a subtitle to this post, it would be Faith & Love.

When we met in Fuerteventura, it took us all week to establish that we were definitely going to meet up again, so it wasn't until the flight home that we had a real, deep conversation about... well, deep things. He asked me if I knew how old he was, and I honestly didn't - and was honestly surprised to find him 12 years my senior, which I'd never have guessed! Also, divorced. None of it thwarted the sense of peace I had, though, as I sat there in the airport cafe with him holding hands.

On the flight back, we had four more hours to talk. Cutting to the chase, at one point I asked: "What do you think of God?" - a pause, a breath, a gulp later, the answer boiled down to agnostic; he thought there was more than just the physical, that there was a spiritual dimension, but not a personal God with thoughts and feelings. My next question was, "So what do you live for?" - another pause, breath and gulp, I think he found that one harder to answer... 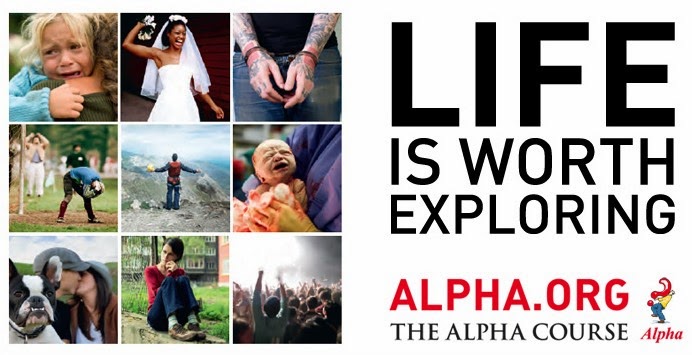 Once we'd met up back in the UK, where he came to a carols by candlelight service where I was part of the choir, I think he was intrigued by my faith. I hadn't kissed him, and had told him I didn't really want to kiss anyone other than my husband. [I still laugh at remembering this - when I said that, his taken-aback response was, "Where is he??" - so had to explain!] So my faith certainly had an impact on the way our relationship was progressing, which is perhaps why he wanted to learn more about it. When I asked if he'd like to do an Alpha Course and explained that it was an opportunity to learn about and ask questions about the Christian faith, he immediately said yes.

Having found a church near him that ran the course, for the next three months I would travel to Bristol every Wednesday after work to attend it with him. I was amazed and humbled to see him grapple with, question, and seriously examine the claims put before him with an open and curious mind, never just dismissing or ignoring an issue. I remember how I learned about Christianity and fought every. step. of. the. way. to find arguments against everything that I found!

I had a very hard time reconciling my growing love for him with the fact that, until a good three months into being together, we didn't share something as basic and deep as our faith: the defining factor in my outlook, world view, and identity. I couldn't stop feeling more and more deeply for him, yet I had no idea what he'd be thinking at the end of the course! It was a scary, emotionally risky time but I could not hold back.

By the end of the course, Mr. had not had all his questions answered - I think no one ever has every single question answered - but he found it made sense and decided to follow Jesus. In his words: "I knew I needed help and direction in how to do life well. Glad I found it." Too easy, I wondered? Is he doing this because of me?

I made a point never to ask him if he was going to connect with that church, if he was going there on Sunday, if he was going to small group... I had to see what he'd do. And what he did was run with it. He became part of a small group (which I visited maybe twice before we were married; it was his group, his church, his walk and growth) and dove into this new life as if he'd been waiting for this all his life. I guess he had - I guess we all have - just some of us are perhaps more aware of that.

He knows he's found a good thing, and he's grabbed it with both hands. I feel privileged to have shown him to the signpost, but he's walked that road himself.
at 21:16 No comments:

There's a wedding at our church tomorrow, two dear friends getting married and we'll be there cheering. And earlier this week another dear friend in a distant place has been in touch to say she's found love.

So today I'm reminiscing, thinking back to the heady days of getting to know Mr. and growing closer - sometimes I feel so settled in our togetherness, it's strange to think I haven't always been with him. But it's only been about two and a half years since we first met! So, if you'll please indulge me, I'll try to keep it short but this is the story of our love.

We met on holiday. Going with a group seemed like good option for me as a single who didn't want to be alone on holiday, but neither did I want to go on a 'singles' trip. I found Traveleyes, who offer group holidays where half the people in the group are blind/partially sighted and the other half are sighted. As a sighted guide, you just act as a friend and helper to a different person each day. And you get a discount! I figured that's a great way to meet some interesting people and have a fun holiday as well as being helpful, so needing to get away from the UK in winter and get some sun, I went to Fuerteventura with them. And so did Mr. for much the same reasons.

We met at Stansted Airport. He was late. I was wearing huge sunglasses. He tells me he didn't really know what to think of me hiding behind those; I was immediately attracted to him. He's handsome, but especially, his kind eyes.

The entire week was an intricate dance of getting to know one another, while we each had responsibility for a new person each day and wanted to make sure we spent quality time with them. We went on each of the optional outings, and often chatted. Somehow we happened to sit together at breakfast and dinner, and it wasn't long before others caught on that something was developing... in particular, one couple who teased and encouraged us in equal measure - until, on Friday at the end of the week (Saturday was home time) the guy more or less ordered Mr. to put his arm around me. Which he did. And then we walked back to the hotel arm in arm, and that sort of settled the matter.

The next day, home day, we knew we'd meet up again. I drove home late at night from the airport (he and others were staying overnight as it was very late) and heard nothing from him the next morning. I sat on my hands, got busy cleaning, trying to read - until finally, after midday, he texted. He'd thought I was going to sleep in and hadn't wanted to disturb. Phew!

I'm pretty sure that from that day on, we were in touch at least every day. He never 'played': I knew, all the time, that he was sincere and that he liked me. No games. I consciously let him set the pace - mostly - but he was always clear and honest with me: a quality of his that I still value hugely.

Why I pick city over suburbs - even & especially with family

We live on a boat. A large boat as boats go, but a small space by most local standards. It's a confined space without outdoor space of our own, and that has some downsides - notably, the dog needs to be walked every time he needs the toilet, he can't just be let out. Later on when we've got the child, equally, I can't just open the back door and say, out you go!

Beyond that I truly struggle to come up with downsides. I love living in the city. My grandmother, with whom I rarely agreed about anything, was a city dweller all her adult life (and brought up two children in Vienna) and could not understand why anybody wouldn't choose to live in such a convenient place. I lived in New York City for a while and I'm still in touch with an amazing family with three girls who choose to live in Manhattan, right in the place which the majority of people (who can afford to) will leave as soon as they start families.

Bristol certainly doesn't compare with NYC in scale, but it's city living, make no mistake. So, you ask, it's crowded and living space is small and why do I love this?


I have never felt confined in the middle of a city. I don't always love all aspects of cities - in larger ones, the pollution, overcrowding, sheer noise and so on can make me crave a getaway into silence and solitude. But I always come back to the city. It's where so much life happens, and I can't wait to introduce our little one to the bustling life of the city!
at 22:10 1 comment:

A label for everyone: looks like I'll be a 'crunchy mama'

In trying to get ready for the baby adventure, I'm reading and learning lots. One of the things I've learned so far is that, since mothering is a mass pursuit (by which I mean, the very vast majority of all women do it), everything I might want to do or consider has been done or considered by someone else before. Here's a truth: nothing I do, think or consider in relation to my child is unique. Someone else has already done, thought, or considered it.

I think that's great! In the age of the Internet, I can learn from the experiences of others and hopefully avoid some of their mistakes.

It also means there are groups of people with labels on. Think of 'tiger mothers', 'earth mamas', you name it... I certainly don't go around looking for labels and then trying to conform to any particular label. Although there can be comfort and support in that, because similar people cluster together and help each other. I've always done my own thing: I suppose I collect labels more like scout badges, never just one, and they don't usually go together.

So for example, I'm a vegan Christian. A Christian vegan. I have yet to meet another, online or in person - which puzzles me really, given that compassion ought to be a central Christian tenet, yet in the evangelical circles I move in this seems to apply almost exclusively to humans. Christians and vegans tend to be in pretty much opposite camps, for reasons unfathomable to me - vegans being (generally unfairly) associated by the other camp with unwashed hippies, Christians being (equally unfairly) associated with right wing homophobes. I like to think I'm neither unwashed, nor right wing or homophobic - I just try to follow truth (Christianity) and lovingkindness (veganism) without seeing them as diametrically opposed.

Now crunchy is an interesting one - why that designation I have no idea (a shared affinity for crunchy granola? Crunchy over smooth peanut butter?)... I've come across that label several times when searching for things / ideas totally unrelated to each other, so I couldn't help but notice a pattern... looks like the things I'm considering, ways I plan to raise my child, often conforms with the crunchy label. Not always, mind! Urban Dictionary defines a crunchy mama like this:

Here's the hippie label rearing its head again! (still no flowers in my hair). But yeah... here's how I plan to 'crunch' it...